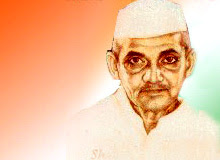 
Lal Bahadur Shastri was born on October 2, 1904 and died on January 11, 1966. He was the third Prime Minister of independent India and a significant figure in the Indian independence movement.

Early Career of Lal Bahadur Shastri,
Lal Bahadur was born in the year 1904 in Mughalsarai, Uttar Pradesh as Lal Bahadur Srivastava. His father Sharada Prasad was a poor school teacher. When Lal Bahadur was three months old, he slipped out of his mother`s arms into a cowherd`s basket at the ghats of the Ganga. The cowherd, who had no children, took the child as a gift from God. Lal Bahadur`s parents lodged a complaint with the police, who traced the child, and returned him to his parents.

Lal Bahadur`s father died when he was only a year and a half old. His mother Ramdulari Devi took him and his two sisters to her father`s house and settled down there. Since there was no high school in their town, he was sent to Varanasi where he stayed with his maternal uncle and joined the Harischandra High School. While in Varanasi, Shastri once went with his friends to see a fair on the other bank of the Ganges. On his way back he had no money for the boat fare so Instead of borrowing money, he jumped into the river and swam to the other side.

As a boy, Lal Bahadur loved reading books and was devoted to Guru Nanak`s verses. He idolized Bal Gangadhar Tilak, the Indian nationalist, social reformer and freedom fighter. After hearing a speech of Mahatma Gandhi at Varanasi in 1915, he dedicated his life to the service of the country. He also dropped his surname, as it indicated his caste and he was against the caste system. During the non-cooperation movement of Mahatma Gandhi in 1921, he joined processions by taking a bold step against the restrictive order.

Upon completion of his course at Kashi Vidyapeeth in 1926, he was given the title Shastri ("Scholar"). The title was a bachelor`s degree awarded by the Vidya Peeth, but it remained as part of his name. He also enrolled himself as a life member of the Servants of the People Society and began to work for the upliftment of the Harijans at Muzaffarpur. In 1927, Shastri married Lalita Devi of Mirzapur. In spite of the prevailing dowry tradition, Shastri accepted only a charkha and a few yards of khadi as dowry. All his lifetime, Shastri was known for his honesty and humility. He was the first person to be awarded the Bharat Ratna after his death, and a memorial "Vijay Ghat" was built for him in Delhi. Several educational institutes, roads, public squares and monuments in India are named after him. The Lal Bahadur Shastri Stadium in Hyderabad, Andhra Pradesh is an example of this. 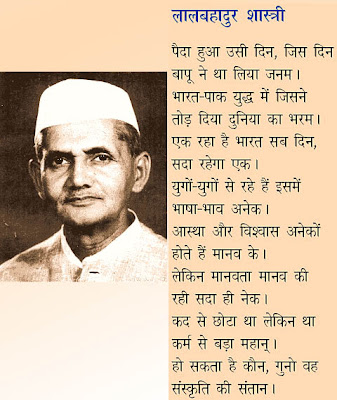 Mohandas Karamchand Gandhi, Mahatma Gandhi, the apostle of peace and the Father of the Nation was born on 2nd October 1869 at Porbandar in Gujarat.
Gandhi Jayanti is celebrated on the very day every year as the birthday of Mahatma Gandhi, Father of India.
In his autobiography My experiments with Truth Gandhi recalls that his childhood and teen age years were characterized by education in a local school, marriage to Kasturba at the age of 13 and an intrinsic love for ‘truth’ and ‘duty’.
Gandhi, as he was popularly called, proved that non-violence is the most effective instrument of social change. His teachings are promoted even today to avoid violence and find peaceful solutions to conflicts.
Through his sheer dedication and self-belief, Gandhi freed India from the British Raj (British Rule). He proved to the world that freedom can be achieved through the path of non-violence.

For Gandhi ‘Non-violence’ and truth were two inalienable virtues. He summed up the entire philosophy of his life as : "The only virtue I want to claim is truth and non-violence. I lay no claim to super human powers : I want none".
The United Nations General Assembly announced on 15th June, 2007 that October 2nd will be celebrated as the International Day of Non-Violence